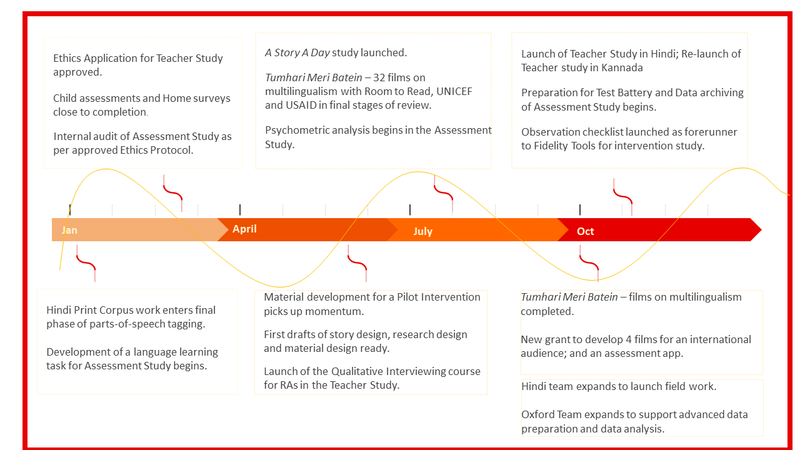 Over 2021, the TalkTogether team consolidated the work on children’s book language. Online activities were conducted while communities remained closed during the pandemic. Once schools reopened, our teams started meeting five- and six-year-olds following strict protocols to protect the participating child and the visiting researcher. To date, we have met 300 children, daily for a fortnight, which has allowed us to assess their language skills and knowledge. The information we have gleaned is yet to be analysed, but there is more we now know from work begun in 2020.

The TalkTogether Age-of-Acquisition Word Lists for Kannada and Filipino provide estimates of when 885 words in each language are first understood. For example, bisilu (sunlight), biigavu (lock) and bhuupaTavu (map) in Kannada and bulaklak (flower), bayabas (guava), and barakuda (barracuda fish) in Filipino, are estimated to be first understood between 2-3, 4-5 and 6-7 years respectively. We wanted to estimate the age at which a word is first learned because this allows us to judge if some children are taking longer than average to expand their vocabulary.  Such children require teaching support.  One consequence of the slow expansion of vocabulary is that children’s talk will remain limited in the words they use.  We can also now see the kinds of words that are acquired later. We have found that later acquired words are usually longer, packed with more units of meaning (like chirp vs chirp+ing) and appear in books for older children. We also now know that action words (verbs like splashing and swaying) are estimated to be learnt later than many of the nouns in our lists. Along with similarities across the two languages, we also find differences. In Kannada, unlike in Filipino, most adverbs and adjectives are estimated to be acquired later than most nouns.

Our previous report found the language in Kannada and Filipino children’s books rich with inflections attached to root words (like the inflections -ed and -ing attaching to the root word ‘chirp’, but occurring far more often and with two, three and sometimes more inflections per word). It is important to understand inflections because they complete the meaning of phrases and sentences and are essential to listening and reading with understanding. We now know that there are several variations in common words found in learning materials used in Filipino kindergartens. For example, multiple derivations were found in children’s books for 3- to 10-year-olds for the word kain (with meanings ranging from ‘to eat’, ‘having something to eat’ and ‘a place to eat’ to ‘fed’ and ‘food’). These are words teachers expect to teach preschoolers, and parents expect children to understand. A similar richness is found in Kannada. For example, 90% of words in books for 3- to 10-year-olds are inflected. Also, close to half of all words are compound words (examples of compound words in English are butterfly, windowpane, and skylark). Most often, it is action words like haar + i + hooy + itu = haarihooyitu (flew away) that are lengthy because they are words with multiple inflections, but object names (nouns), describing words (adjectives) and pronouns can also be richly detailed. We have discovered that children must learn that inflections may differ in meaning depending on the word they appear in (similar to ‘ing’ in: swing vs sewing, but more varied). An appreciation of the language that children see in books or hear during story reading is important when designing learning programmes to foster oral language. The TalkTogether project will evaluate an intervention based on these principles during 2022.

We recommend that under-studied languages construct a little corpus of child-directed print as a tool to inform the design of teaching programmes and language research. A thorough evaluation of the TalkTogether little corpus against a corpus approximately fifteen times in size showed that the little corpus, when constructed using certain book and sentence selection rules, mirrors well the richness and variety of language in children’s books. This is a major finding from our Kannada and Filipino work showing for the first time that a well-constructed little corpus is dependable.

It is possible for the TalkTogether project to take many new directions. Since so many words, and units within words, change meaning depending on the context (called polysemous words and polysemous affixes), it will be important to investigate how children gain mastery over this dimension of a language. We have not yet explored this intriguing aspect of language development but now that the TalkTogether Word Lists are freely available, we hope colleagues will pick up this research question. We have also made open access our workflow protocols so, like the work described for Kannada and Filipino, research can be undertaken in other understudied languages across low- and middle-income countries.

The TalkTogether team continues to face challenges in the field due to school closures, and the time it is taking for routines to be re-established within the school system. One aspect of our work, the classroom ethnography has now been replaced with a study to understand teachers’ beliefs and practices that support children’s oral language development. Early indications using word pictures (vignettes) suggest that findings from the teacher study will provide insights into how to develop an oral language programme that is sustainable in the longer term.

Finally, a major TalkTogether output at the end of 2021 is a sixteen-part film for teachers titled Tumhari Meri Batein (Our Conversations). This self-paced professional development pack introduces the phenomenon of multilingualism, what current research tells us about the multilingual child, what works in multilingual classrooms, and the shift needed in school culture to support multilingualism.

This and other resources developed within our collaborative international project have exceeded the original activities proposed in the project.